What would be a Great Question for this Lesson? - Simple Reminders

Once I passed my lesson plans along to the new Pre-Calculus teacher, I forgot all about that paper.  I believe it's time to resurrect it.
at January 26, 2016 No comments:

What I Learned about Creating Card Sorts

My students and I enjoy card sorts.  It's a nice little bridge from guided practice to independent practice.  In my 16 years of teaching I have started to notice some things that make my life easier as a teacher and the learning deeper for the students when creating these card sorts. 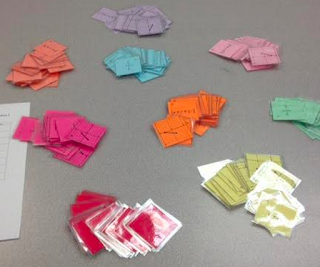 In a effort to save money I use to always use white paper for everything.  Now I copy each set on a different color if possible.  There are some repeat colors but it's better than all white.  There are two reasons for this.  First, the students seem more excited when it's on color paper, like it's something novel and game-like.  Second, when you find a stray card at the end of class it will be easier to determine which set it belongs to.


Write a Number of the Back of the Set:

I don't know about your students, but I will always have one student who insists on writing on the cards, and then that set is ruined.  Our department spent about $30 on a laminator and of course the cost of the laminating sheets.  But I think it's well worth our sanity to not have to keep creating new sets each year.

For some of the cards, have some information missing.  This forces students to think about the card sort.  It also makes the card sort more than just a matching activity.


Store the Cards in Ziplock Bags:

I started by storing the cards in envelopes but I found two problems with this: the cards would fall out or some student would lick the envelope shut because that's what you do with envelopes.  Now I use Ziplock bags, one bag for each set.  Then I store the entire card sort in either a small labeled box or a large interoffice envelope (save those shoe boxes).
Another option is to store the whole card sort in a larger ziplock bag, tape the one end, and hole-punch the tape.  Here's blog post with more details on that.


Store the Cards on Ring Clips:

After color-coding, numbering, and laminating, you might want to hole-punch the corner of each card and then keep them together with a ring clip instead of ziplock bags.  Just make sure you don't hole-punch any important information. 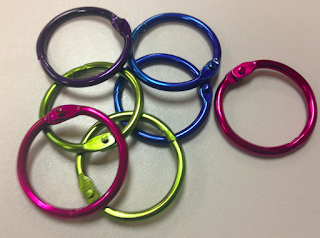 Update 1/26/16:
Since publishing this post I've had a few more ideas with card sorts:

1) If you're using ziplock bags, I recommend piercing each bag with a safety pin.  This way it's easy to get the air out.

2) If a card can be written in more than one format, do it.  For example, I was looking at my card sort with domain and range.
Students match a graph with the domain of:
4 ≤ x < infinity
x ≤ 4
and [4, infinity)

It's been a while since I created a game and I had a chance to sit down today and do a little brainstorming.  My thoughts kept going back to factoring trinomials so that's where I landed.  I have not play-tested this game.  I won't get to factoring until later in the year.
I appreciate any feedback for this game, especially if any of you have a chance to play with current students.

Prep students for factoring trinomials.  This game asks students to think of two numbers that will add to _____ and multiply to ______.

Can be played as a whole-class game with 2 - 5 teams
or table top with 2 - 5 players.
I'm concerned about 5 teams or players since this is a turn-based game and there would be a lot of down time between turns.

The -10 and -3 are placed on the discard pile and two new cards from the draw pile are placed there.  It's player 2's turn.

-1 is placed on the discard pile, and new card replaces it from the draw pile.  Play continues clockwise.


John Golden always has great suggestions for my games.  Check out this comment that he left about the game before you play.

To answer his question about the targets, those are all the sums and products of the integers from -5 to 5.  Initially I was going to have the students use cards in their hands to pick numbers from, but then decided to allow them to use what ever numbers they wanted.

Option 2:  The player with the most points after _____ minutes is the winner.

Option 3:  After ____ rounds of play, the player with the most points is the winner.

Option 4:  The player with the most points once all the cards are gone from the draw pile, is the winner.
at January 12, 2016 7 comments:

Today in class the students were graphing linear equations in standard form.  Some students have been absent for yesterday's lesson, and other students struggle to convert equations from standard form to slope-intercept form.  You know how overwhelming it can be to have to go around the room student-by-student and help them with problems, that's why I don't do it anymore.

I have each student's name written on an index card, I shuffle the cards, then randomly pair the students by picking two cards at a time.  If there is an odd amount of students I will create one group of three.  I have two different worksheets: One paper has problems on the front for the first student and the answers are on the back for the second student; the other worksheet has problems on the front for the second student and answers on the back for the first student.

I instruct the students to have one student do one problem at a time.  Student A will complete problem 1 while Student B makes sure he is doing it correctly by using the answer key on the back of his paper.  Then both students flip over their papers and Student 2 completes problem 1 on their paper while Students 2 monitors.


I have a habit of using math-aids.com to generate worksheets. They look clean, provide answer keys, and generate a different sheet each time.

I'm resurrecting the index card entrance questions.  I print out questions all related to the same topic from a test generator, tape them to index cards, and then laminate them.  Every day as the students walk into class I hand them an index card.  Because each index card has a unique problem on it, I avoid this issue of one student blurting out the answer.  Also, I'm able to use the cards over and over again.

It all sparked from this article (click for the link).

In a very small nutshell, it states that the best two ways for students to study is to self-test and study often (no more cramming).  These entrance questions take care of both those ideas.

I am concerned with the of the downtime that these will create.  If a student is struggling with a problem and I am helping him with it, there will be students with nothing to do.  I will need to find a solution to this.  Perhaps on ongoing class problem like 4 fours will solve this dilemma.

I don't know why I stopped doing these in the first place.  In any case, they are back. 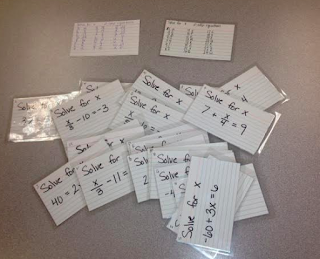 For the above set of cards, I created 24 2-step equations.  They each have a unique solution (the numbers 1 - 24).  For these I could either have the students line up in order, or just simply solve them at their seats.  To check their answers, I put a letter on the top of each index card so I know which one it is, then on a separate index card I wrote my answer key.

Sometimes I forget that students care if I like them. I received an email from one of my students a few weeks ago, and the subject line ...

Simplifying Radicals
I am a wife, mother, teacher, runner, scrapbooker, reader, and only female in the house.