on September 28, 2012
I have a problem with throwing away plastic.  I just can't bring myself to do it.  In the borough where I live, there is a recycling program but it will only recycle #1 and #2.  This cute little bucket below is #5.

Have you seen these?  They put your fries in them at the fair.  Every year we order one of these, not only because we love to eat fresh cut fries, but because it makes carrying the goldfish we win easier. 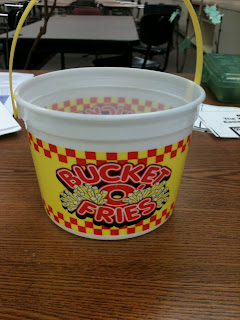 I've been looking at these buckets for quite some time now and I starting to think about the Made4Math Challenge.  What could I do with a Bucket O Fries?

And then it hit me, they would be transformed into Bucket O Lies!!

At one point, I had only collected 3 buckets, so I turned to my Facebook friends who came through for me with 3 more buckets.  Thanks guys!! 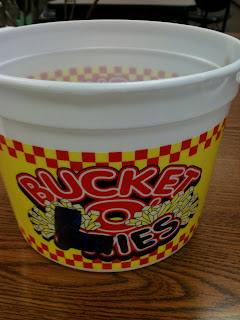 For formative assessment, I created 12 quadratics that were solved (factoring, completing the square, and quadratic formula).  Some were solved correctly, others were solved incorrectly.  In groups of 4 the students had to sort through the papers and decided which ones were correct and for those that were incorrect, they were to indicate where the person went wrong.
You can check out those problems here. 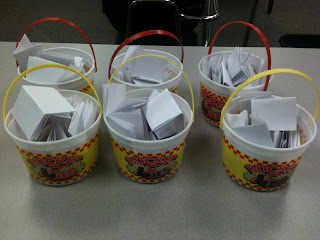 After all groups were finished we looked at each problem one-by-one.  I called on students randomly with the name cards (popsicle sticks).  I was surprised by how many misconceptions that were uncovered by doing this.

One student asked, "Can we make our own bucket o lies?''
My response, "You bet!  It would count towards High Performance."

I'm getting it now.  You know, the whole being-a-better-teacher thing.
Standing up front lecturing everyday stinks.  But this lesson had the students working together, analyzing problems, justifying their reasoning, responding to other students' ideas, and of course learning the lesson objectives.