on March 27, 2014
This game needs a name yet.  Your help is appreciated with that endeavor.

Break the class into 5 teams.  I use 5 teams because desmos has 5 colors other than black (purple, blue, red, green, and orange).

The overlapping shaded region is the area that is safe from tornadoes, so the players will want to move their trailers there or actually move the shaded region.

Each team rolls a die to see what they can do:

To unleash a tornado, I numbered each region of the graph that was created by the inequalities, except the overlapping shaded region, then rolled the die.  So if the regions were labeled 1, 2, and 3, and I rolled a 2, all the trailers in the region labeled '2' would be deleted.  If I rolled a 4, 5, or 6 then the tornado never formed.

We played this for the entire period (45 minutes), and the team with the most trailers by the end of the class was the winner.  I had two teams win with 3 trailers each.

There should be more ways to unleash tornadoes.
We should start with 2 trailers.

What I Will Try Next Time:

Instead of rolling 1 die, each team will roll 2 and then decide which they want to use.  I think I will still begin the game the same way, but because there are two dice and more options, the players will have the opportunity to add more trailers and unleash more tornadoes.

What I Loved About The Game:

Students were practicing skills they normally hate.  Such as:

The students discussed what would happen if they changed the direction of the inequality in one equation as opposed to the other.  Would their other trailer be safe?  Where would the overlapping be?

They debated about how to change the y-intercept or the slope to make one of their trailers safe but not one of their opponent's.

I can't get these discussions when I hand out worksheets, but tornadoes sweeping away their mobile homes, they're all over that.

Here's what our 'game board' looked like at the end of class: 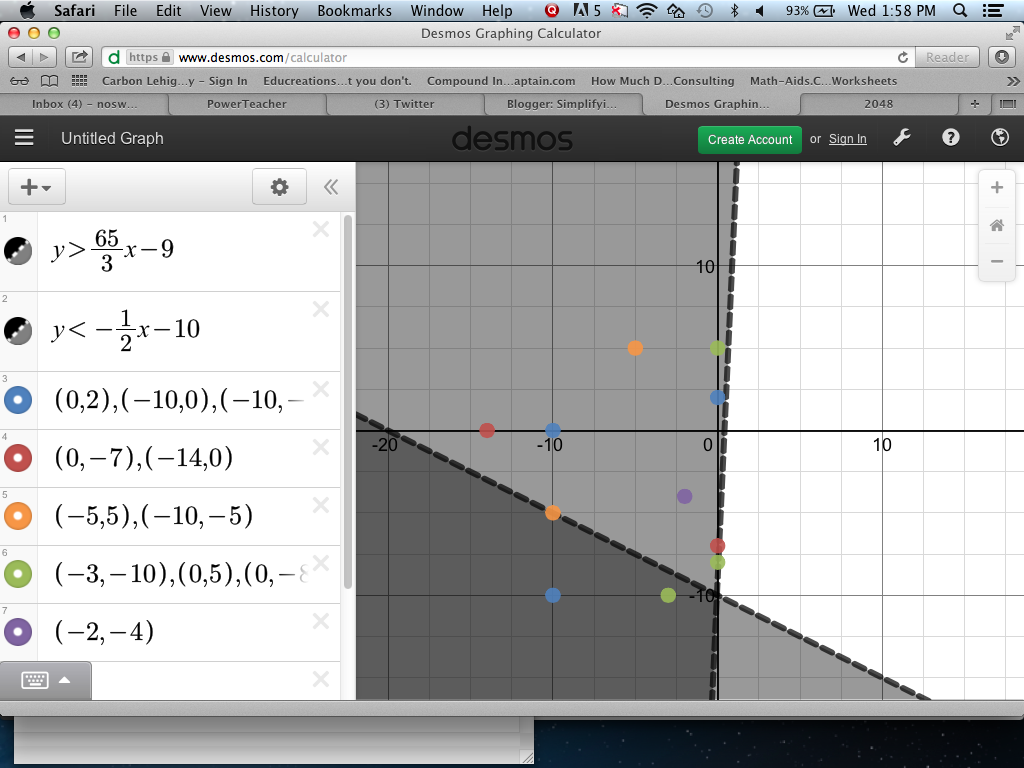 Thoughts?  Comments?  What about a title for this?

I played this game with a different class and we tried the following rules and it made the game more exciting.

1) Roll two dice, allow the students to determine which number they want to use.  If a 6 is rolled, a tornado must be started.

We also discussed ways to damage your opponents mobile home.  Perhaps there could be a way to steal their tires so they can't drive to another location.

Have any of you played this game?  Any feedback for me (good or bad)?

@NoraOswald class loved it & asked to do it every lesson! Used to break dbl Geom lessn w/Functions nxt topic. Will try the Conics game then!
— Stephen Clark (@s_clarky) April 5, 2014