on February 15, 2013
I finally got the reaction from a 3-act math task that I've been waiting for.  One of my students (who hardly says boo in class) threw his pencil down when he saw the third act.  If that isn't passion, I don't know what is.  They were in to it, they wanted to know why, they asked where those numbers came from, they made guesses, they tried to figure out why, they took pictures of the board before leaving class.  One student even said that he was going to post about this on some gaming forum.

The whole reason I created this 3-act task was to have students realize that not everything is linear.  The students watched the first act and I encouraged them to make guesses, just a number from their gut. Many students used linear reasoning for their guess.  I heard this over and over again today: "Since he's a little lower than half the height of the pole, he must have a little less than half of the points."

Then I gave them a sheet with the photos on it and asked them to try to come up with an another answer (maybe it was the same) but to put some reasoning behind it.  I recorded their answers on the board. 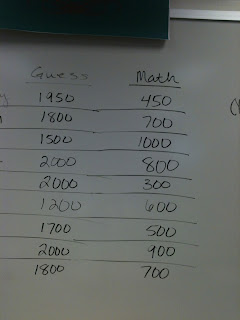 You can see that many of their answer came down quite a bit in this class and here's the reasoning.  When I handed out the paper with the three photos on it, one student noticed that in the third picture the score had to be a three-digit number because of the location of the part of the zero that I neglected to crop out of the photo.

For my other classes that didn't notice it being a three digit number, many of the numbers seemed to stay the same, or close to the same, as their initial guess.  Some got out their rulers and did some measurements to find about 1500.  Again, a linear assumption.

Now what?  One student suggests measuring the height of the third photo and plugging that number in for x to find the score.  We get a height of 4cm, and plug in to find y = 1536.85.  We know that we would never get a score like that in the same, so we round it to 1500.  The students still stand their ground with a three-digit number. 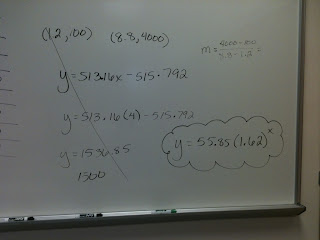 We watch the third act (the answer).  Once we are getting close to the third jump, the students are hooked, their eyes are glued to the screen, and one students rubs his palms together and says, "Here we go!".  When they see that the answer is 400, one student stands up, throws his pencil down, and complains that he was so close.

In the other two classes the reaction was similar.  They all assumed that I was right, because I'm the teacher.  We watch the video and when they saw that the answer was truly 400 and not 1500 there was a short hesitation followed by a few "WHAT?!?!?!" going around the room.  What happened?  We must have measured wrong.  The slope is undefined.  We should have measured from his nose.  The time affects the score too.  We addressed all of these concerns and realized that nothing was wrong with our math or our measuring and the score on the flagpole is not effected by the time in the game.  So what happened? 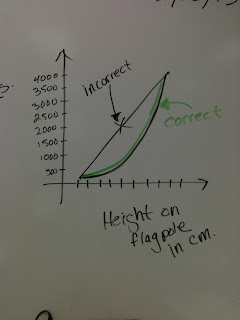 Eventually we get around to finding out that assuming it was linear was a mistake.  Not everything is linear.  This helped to lead us to my next question:  What are some things that are linear and some things that are non-linear.  I gave a few examples of each type, then asked the students to create their own and post them on the board. 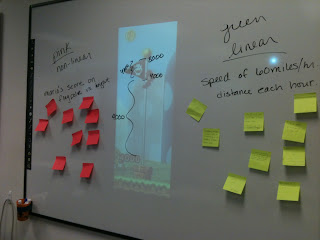 At the end of the day one of my students from first period enters my classroom.  He looks like he's on a mission.  I see him go to his folder and get of the paper we did our work on for this problem.  It's the same student who took pictures of the board.  So here's the thing.  It a well known fact that this kid thinks he sucks at math.  But he thought about math during 1st period because he had to, then it interested him enough to remember to come back to my room to get this paper, THEN he's going to go home tonight and post on a forum about what we did in MATH class.  How awesome is that?!?!?!?

Here are all the goods:

Hello Pinteresters!!!  I get a lot of traffic from Pinterest by what I suspect are teachers looking for games to use in their classrooms.  Many educators like this game, but be sure to check out the other games on my blog.  Click here to more games.

I don't watch much TV, but when The Big Bang Theory is on, I will be there.  It's one of the only TV shows that my students and I both watch.  From that show my Bazinga Game was born.

It's rather straight forward in that the students are in teams, I ask questions, and the students answers them.  If a team is correct they have the chance to pick a Bazinga Card and we do what it says.


There are nine pockets, each with 3 cards in them.  Here is the breakdown of the cards:

- (3) Take away two points from one other random team and give them to your team.

- (3) Erase two points from one other random team.

Imagine being able to send your students away to a remote island and be the stars of a new reality show called Survival of the Fittest.  That's exactly what I did and the students LOVED it.

Once all the groups were satisfied that each member knew the lesson, I gave an exit ticket that the students had to complete individually.  Each exit ticket had three questions of different difficulty level.  The problems that they students got correct dictated what supplies they received in order to survive on the island.

This game needs a name yet.  Your help is appreciated with that endeavor.